Home / Mental Health / The Stigma of Mental Disorders in Afghanistan

The Stigma of Mental Disorders in Afghanistan

Definition of the Problem 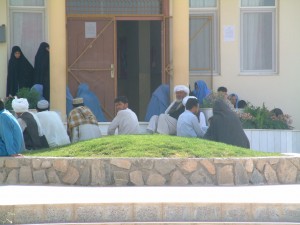 Patients waiting outside a mental health clinic in west Afghanistan

The majority of mental health disorders in Afghanistan stem from the direct and indirect impact of years of war and conflict in the country. This caused a lot of psychological trauma to the people of Afghanistan. In many cases medical treatment and hospitalization are inadequate and, therefore, it is hard to provide the most effective interventions.

The condition of mental health is extremely pitiable in Afghanistan. According to statistics, depression and anxiety disorders are prevalent, especially among women and children.

The main cause for this among women is mostly the traumas of war or related to the sexual hostility among women, cultural reasons, the restrictions imposed on their social activities, and the various other rights that they are deprived of.

Poverty, lack of employment and helplessness are just a few of the other causes for mental health problems among women.

Child abuse, one form of which is called Bachabazi, broken families, poverty, working to support a family at a young age are the main causes of mental problems among children.

The aggressiveness of the war caused a lot of physical disability among men. This caused depression, panic attacks, phobias, and anxiety disorders, primarily Post-traumatic Stress Disorders or PTSD. Moreover schizophrenia is one of the most common neuropsychiatric disorders among young males (and females), which is usually due to the unsettled environment they live in.

The prevalence of mental disorders is recognized by medical personnel and people themselves. The high number of admissions of patients with mental disorders in different hospitals and shrines to seek traditional treatment shows how prevalent mental health problems are.

The gravity of this challenge needs to be recognized and addressed immediately by establishing ways to provide psychological treatments like psychotherapy and hypnotherapy as efficient and effective ways of treatment.  In addition, rehabilitation centers should be built to hospitalize patients during the acute phase of their disorder.

What Can Be Done?

Currently there is not a sufficient number of Afghan doctors to offer services for all those in need of psychological intervention. Presently the only major means of treatment is medication, which is obviously not sufficient. The specialists who prescribe psychiatric medications do not have the skills to provide psychological treatments.

Medical treatments are more effective in cases where short-term relief is required. To find the cause of the problems and to resolve the conflict, however, patients need psychotherapy counseling, and hypnotherapy. This kind of treatment works on the subconscious mind of the patient which is the core of the problem, providing a way for the patient to deal with the various symptoms long term.

In order to provide good mental health services, we need professional psychologists and hypnotherapists who have the correct knowledge and skills of this art. The Afghan society also needs to have knowledge about the nature of mental disorders since they are associated with stigma. Explaining or describing their worries comes with shame and disgrace in the society. As a result most of these problems are not disclosed and kept as a secret. This means the condition goes untreated, becoming more serious until it reaches a critical point, sometimes with severe depression and suicidal thoughts or attempts. The problem gets more serious because some mentally ill people are chained up, abused and ridiculed, which further prevents the patients from recovering.

In most cases, patient suffering from mental diseases are bullied and shunned from society. They lose all the respect and are considered “crazy”. On the contrary, encouraging families and the community to show support and helping them change their views about mental illnesses can result in more successful treatment.

Rawan Online is the first website on psychology and mental health for Afghans covering a wide range of topics related to health and relationships.
Previous The Emergence of Retail Clinics
Next When Unwanted Thoughts Take Over