A link between unconscious conflicts and conscious anxiety disorder symptoms has been shown, lending empirical support to psychoanalysis.

An experiment that Sigmund Freud could never have imagined 100 years ago may help lend scientific support for one of his key theories, and help connect it with current neuroscience.

June 16 at the 101st Annual Meeting of the American Psychoanalytic Association, a University of Michigan professor who has spent decades applying scientific methods to the study of psychoanalysis will present new data supporting a causal link between the psychoanalytic concept known as unconscious conflict, and the conscious symptoms experienced by people with anxiety disorders such asphobias.

The research involved 11 people with anxiety disorders who each received a series of psychoanalytically oriented diagnostic sessions conducted by a psychoanalyst.

From these interviews the psychoanalysts inferred what underlying unconscious conflict might be causing the person’s anxiety disorder. Words capturing the nature of the unconscious conflict were then selected from the interviews and used as stimuli in the laboratory. They also selected words related to each patient’s experience of anxiety disorder symptoms. Although these words differed from patient to patient, results showed that they functioned in the same way.

In a previous experiment Shevrin had demonstrated that time-frequency features, a type of brain activity, showed that patients grouped the unconscious conflict stimuli together only when they were presented subliminally. But the conscious
symptom-related stimuli showed the reverse pattern — brain activity was better grouped together when patients viewed those words supraliminally.

“Only when the unconscious conflict words were presented unconsciously could the brain see them as connected,” Shevrin notes. “What the analysts put together from the interview session made sense to the brain only unconsciously.”

However, the experimental design in this first experiment did not allow for directly comparing the effect of the nconscious conflict stimuli on the conscious symptom stimuli.

To obtain evidence for that next level, the unconscious conflict stimuli were presented immediately prior to the conscious symptom stimuli and a new measurement was made, of the brain’s own alpha wave frequency, at 8-13 cycles per second, that had been shown to inhibit various cognitive functions.

Highly significant correlations, suggesting an inhibitory effect, were obtained when the amount of alpha generated by the unconscious conflict stimuli were correlated with the amount of alpha associated with the conscious symptom alpha – but only when the unconscious conflict stimuli were presented subliminally. No results were obtained when control stimuli replaced the symptom words. The fact that these findings are a function of inhibition suggests that from a psychoanalytic standpoint that repression might be involved. 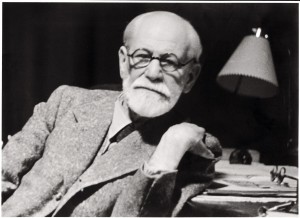 Freud developed Psychoanalysis Theory, which has remained one of the leading schools of psychology.

“These results create a compelling case that unconscious conflicts cause or contribute to the anxiety symptoms the patient is experiencing,” says Shevrin, who also holds an emeritus position in the Department of Psychology in U-M’s College of Literature, Science and the Arts. “These findings and the interdisciplinary methods used — which draw on psychoanalysis, cognitive psychology, and neuroscience — demonstrate that it is possible to develop an interdisciplinary science drawing upon psychoanalytic theory.”

He notes that a prominent critic of psychoanalysis and Freudian theory, Adolf Grunbaum, Ph.D., professor of the philosophy of science at the University ofPittsburgh, has expressed satisfaction that the new results, when added to
previous evidence, show that fundamental psychoanalytic concepts can indeed be tested in empirical ways.

For more than 40 years, Shevrin has led a team that has pushed at the boundaries between the disciplines of neuroscience, cognitive psychology, and psychoanalysis, looking for evidence that Freudian concepts such as the
unconscious and repression could be documented through physical measures of brain activity. His work has explored the territory where neurobiology,thoughts, emotions and behavior meet.

In recent years, exchanges between Grunbaum and Shevrin explored the nature of the evidence for the existence and impact of unconscious conflicts. In a 1992 publication, the first study referred to, Grunbaum agreed that Shevrin had obtained objective brain based evidence for the existence of unconscious conflict, but Grunbaum noted that he had not shown that these conflicts caused psychiatric symptoms. His response to being informed of the new findings was an email stating: “I am satisfied.”

The above story is reprinted from materials provided by University of Michigan Health System.

Rawan Online is the first website on psychology and mental health for Afghans covering a wide range of topics related to health and relationships.
Previous Intensive Mobile Phone Use Affects Young People’s Sleep
Next Three Misconceptions About Violence against Women in Afghanistan