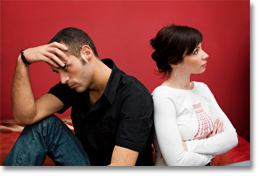 For as long as you’re married, there can be disputes and conflicts with your partner here and there. So forget about a totally conflict-free life, because that would be asking for impossible and searching for something that doesn’t exist in the first place. However, the good news is that many studies as well as experience show that the most successful couples are those who effectively resolve disputes. The other good news is that one can learn conflict-resolution techniques.

For instance, highly respected and famous researcher in marriage and parenting John Gottman (1995) showed that if there are five positive behaviors for each negative behavior in the family, then relationships are still healthy and they can function well. Therefore, family conflict shouldn’t always be considered a negative issue or a problematic pattern. Rather, problem-solving techniques should be promoted and people should be encouraged to learn and implement them.

However, there are three elements that should be considered crucial, because they are the building blocks for maintaining a healthy relationship in addition to learning problem-solving techniques.

The first and most important element is communication. This is vital, because if there is no communication, the relationship loses its meaning and value. Whenever there is a lack of communication, assumptions arise, speculations take form, and misunderstanding grows further. For example, when the husband avoids talking to his wife, or when the wife leaves the house and prefers to communicate with her husband through their children, any or all these problems can take shape and turn into a more serious and complicated problem that the couple will not be able to solve on its own.

The third important element is understanding. I am not trying to define “understanding” from a cognitive or philosophical perspective here. Here, understanding simply means a genuine attempt to find out how the other person is feeling or trying to say in the here and now. Take understanding out of the environment between the couple, and there walks in anger, frustration, and resentment. And since marital relationship is not a temporary encounter, such feelings and emotions can seriously wear out the couple in the long run.
It is crucial to know that in marital conflicts, there is no winner, champion, or hero! The husband or the wife may feelthat s/he has won the argument, but we are talking about a marital relationship and that obviously indicates there are at least two people involved, so there are always two scenarios:

1. One partner is sure that s/he has won the argument and therefore feels good about it (even though temporarily) whereas the other partner is left with frustration, anger, resentment, and worry. More importantly, the problem remains unresolved and unattended.

2. Both partners work together and generate a win-win situation, because they realize that living together is not about competition but it is about working together, solving problems together, enjoying each other’s company, reaching their goals together, and supporting each other in the process and along the journey. I am sure by now you know what that “journey” is. That journey is life itself!

When it comes to Afghan couples, I can see that usually one, two, or all three of these elements are missing, especially that our culture encourages us to confront the problems indirectly, to imply things instead of speaking openly, and to suppress our feelings instead of expressing them. What I suggest, however, is that it doesn’t have to be a very non-Afghan method. Even within our own culture, there are ways to put these elements into the problem-solving process and gradually address issues that give rise to conflicts.

In the upcoming articles, I will explore other dimensions and requirements of conflict-resolution in the family.

Esmael Darman is the editor-in-chief of Rawan Online. He has a master's degree in clinical & counseling psychology.
Previous How Parents See Themselves May Affect Their Child’s Brain and Stress Level
Next Communication Tips for Parents