The Truth About Domestic Violence

This article was first published on www.mentalhealth4muslims.com on March 22, 2011

“If the numbers we see in domestic violence were applied to terrorism or gang violence, the entire country would be up in arms, and it would be the lead story on the news every night.” – Mark Green

The amount of abuse that happens in Muslim households today has increased dramatically. It is an unfortunate reality that has been hidden and ignored for far too long in our community. There is no excuse for this or any type of abuse in Islam, yet we continue to see women coming into counseling who are petrified to go back to their homes. If there are children, they almost always know about the abuse and have often witnessed it. Not only has it destroyed Muslim families but it has also weakened the Muslim community. In 2000, the North American Council for Muslim Women reported that approximately 10 % of Muslim women were emotionally, physically, and sexually abused by their husbands. Islam came to liberate the woman, not confine her to one space and take away her rights and dignity. The Prophet Muhammad (peace be upon him) said, “I recommend that you treat women with goodness. The best of you are those who treat their wives the best.”

The Peaceful Families Project put together some statistics of domestic violence within Muslim communities. The following is the result of their research.

The term abuse is commonly understood as something physical. However, there are many different types of abuse such as neglect of a child or an elder, which is the negligent failure of a person having the care or custody of a child or older adult. The caretaker may not be providing adequate food, clothing, shelter, medical care or supervision. Sexual abuse is also a form of abuse and it is the exploitation of a human for another person’s sexual control and gratification. Emotional and verbal abuse is the chronic pattern of behavior where the person is belittled, denied love, marginalized, subjected to extreme and inappropriate punishments or threatened verbally. Economic abuse is the control of financial resources by taking the victim’s money, putting all resources in the controlling partner’s name or forbidding them to handle finances. Below is the power and control wheel used to describe different types of domestic violence: 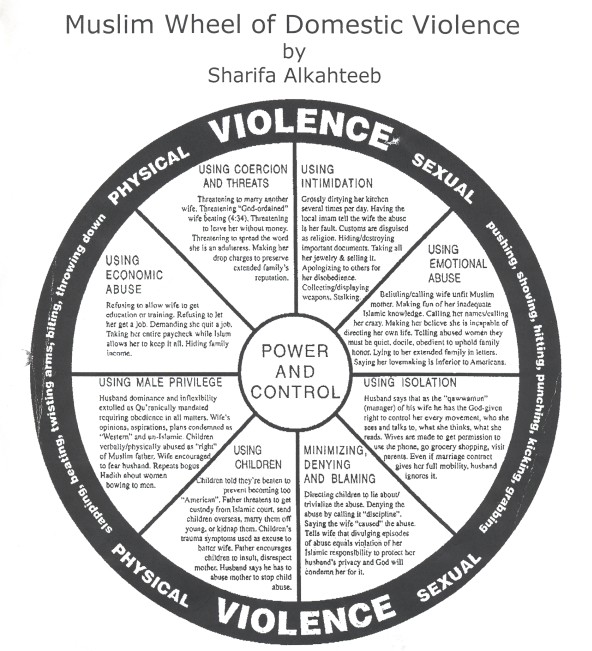 In terms of domestic violence, we need to remember that the survivor is an expert on his or her own experience of abuse. It is true; many victims will stay in the relationship and believe that it may not be the best thing for them to leave. There are different types of abuse: intimate partner abuse, domestic violence and dating violence. In the United States, male batterers are 85-95% while female batterers are 5-15%. Only 10% have a possible mutual aggression. A victim of domestic violence may take responsibility far more for almost everything and it is often completely unwarranted. Abusers are rarely accountable.

The Prophet Muhammad (peace be upon him) has clearly disapproved of men hitting their wives, and that he never in his entire life hit any woman or child. In the Prophet’s last sermon, he exhorted men to “be kind to women-you have rights over your wives, and they have rights over you.” He also said, “Treat your women well, and be kind to them, for they are your partners and committed helpers,” and at a different time, he said, “The strong man is not the one who can use the force of physical strength, but the one who controls his anger” (Bukhari).

Anna Salter’s research concluded that approximately 95-98% of sex offenders are male and 80% of them offend in their own family. The average age of the first sex offense is 14. Furthermore, 96% identify as heterosexual and molest boys and 90% are married, cohabitating or dating adult females at the time of child molestation.

Abel and Harlow’s research concluded that 90% of sex offenders are married and are having consensual adult sex, actively religious, employed and educated with at least a high school degree.

Some myths are that sex offenders have a mental illness (only 2-5% have any clinical diagnosis) or are victims of sexual assault or misuse alcohol and drugs.  Offenders usually have rigid gender roles, have a strong sense of entitlement, lack of accountability and strong possessiveness. Female offenders usually have a large psychiatric history and over 75% begin as “co-perpetrators” with a male intimate partner who is abusive at the time of child molestation.  Sex offenders tend to exploit vulnerability.  Tactics include emotional abuse, economic abuse, isolation, using their children to blackmail them, threats and intimidation.

Generally there is a fear of being alone.  Most of the time, they love the abuser or believe that the abuser needs them.  Usually, they have no place to go, don’t want to raise their children alone, feel shame, vulnerability, stay for monetary means, have hope for change or have cultural, religious or family pressure to stay in the relationship.

What is unfortunate about these statistics is the lack of response from friends and family.  This problem has been and continues to exist in the Muslim community. Azizah al-Hibri, a professor of law at the University of Richmond and author of An Islamic Perspective on Domestic Violence, wrote “what was surprising about the calls, however, was  that  generally  the  women  received  no support from  their female  friends  or their local religious  leaders.”

What Can You Do to Help?

Check out our previous post on domestic violence at: Domestic Violence: Are You a Victim?

For more information on domestic violence within the Muslim community:

2. “Predators: Pedophiles, Rapists, and Other Sex Offenders: Who They Are, How They Operate, and How We Can Protect Ourselves and Our Children” by Anna C. Salter

5.     Abirafeh, Lina. (2007). Freedom is only won from the inside: Domestic violence in post-conflict Afghanistan. In Change from within:  Diverse perspectives on domestic violence in Muslim communities, eds. Maha B. Alkhateeb and Salma Elkadi Abugideiri, 117-31. Great Falls, VA: Peaceful Families Project.

Link to the article: http://mentalhealth4muslims.com/2011/03/22/the-truth-about-domestic-violence/

Disclaimer: The articles published in Rawan Online are presented for information purposes only. The material is in no way intended to replace professional medical care or attention by a qualified psychiatrist or psychotherapist. It cannot and should not be used as a basis for diagnosis or choice of treatment. The views expressed in this work are solely those of the authors and do not necessarily reflect the views of Rawan Online, and Rawan Online hereby disclaims any responsibility for them