Three Misconceptions About Violence against Women in Afghanistan

This article was first published by UN Disptach on June 11, 2012. 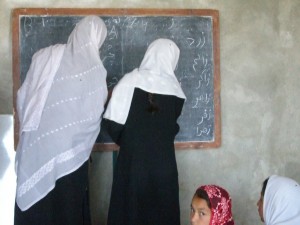 Misconceptions about violence against women in Afghanistan abound in the media and the imaginations of publics outside of Afghanistan itself. Most of these promote the idea that most, even all, forms of violence against Afghan women stem directly from the thirty-four years of war Afghans have endured. The emotional appeal of this narrative is obvious. It offers an all-encompassing explanation for a gut-wrenching human rights problem, and therefore an all-encompassing solution –find a way to end the fighting, and violence against women will end too.

Unfortunately, that prescription isn’t backed up by much more than wishful thinking. Here are three of the most common misconceptions about violence against Afghan women.

1. Violence against women is increasing.

There’s no way to know if this is true. Until mid last decade, women who were victims of gender-based violence had nowhere to turn for help, no one was keeping count of incidents, and it was virtually unheard of for Afghan women to speak publicly about abuse they suffered behind closed doors.

In the past few years, that has begun to change. All we know for sure is that more cases of violence against women are now being reported to national authorities and human rights organizations. More reports should be seen as a good thing. Human rights activists have relentlessly chipped away at the taboo against discussing violence against women, and those efforts are now showing results.

A handful of courageous women have recently gone public with their stories and pressed charges against abusive husbands, in-laws, and even local militiamen. Grassroots movements have demanded justice for these women. Quietly and hesitantly, ordinary Afghans are starting to talk about these high-profile cases as symptoms of a larger national problem.

Violence against women is horrifically commonplace in Afghanistan, but there is no evidence to support claims that it’s getting worse. (There’s no evidence it’s getting any better, either.) Afghans are undergoing the uncomfortable process of reconciling their popular myths about women’s lives with a far bleaker flesh and blood reality. It will still be years before anyone has enough data to tell if the tide is turning. In the meantime, survivors urgently need more protection and better services to heal and rebuild their lives.

2. War is the biggest killer of Afghan women.

The single biggest killer of Afghan women is lack of basic medical care. More Afghan women die from complications in childbirth than from any other cause. Although maternal mortality is decreasing, a staggering 18,000 women still die giving birth each year, according to the UN Population Fund. For the sake of comparison, the UN puts the total number of all civilians –women, men, and children– killed in the armed conflict in 2011 at 3,021, with men comprising the majority of the war dead.

Women and girls do die because of the conflict, but they die in greater numbers from its indirect consequences than its direct acts of violence. When insecurity forces medical relief organizations to close clinics or suspend maternal health projects, and when roads connecting villages to cities are blocked with checkpoints or laced with mines, rural women are left with no access to life-saving care, and many die as a result.

Yet, the areas of the country with the worst maternal mortality ratios are not the war-wracked southern and southeastern provinces, but instead the more peaceful central and northern ones, where the mountainous terrain is unforgiving and aid is spread thinly.

This common claim made by well-meaning Western peace activists and even some Afghans doesn’t sync with actual research findings and extensive reporting on the issue. Interviews with women in burn units, public health workers, and women’s rights advocates indicate that virtually all self-immolation suicide attempts have their origins in intolerable family circumstances.

Again and again, burned women and teenage girls on their death beds have told stories of forced marriages and torment at the hands of resentful in-laws. Appropriately, the Afghan government’s public awareness campaign on the issue of self-immolation addresses these problems.

Recorded numbers of self-immolation suicides have gone up in recent years, especially in Afghanistan’s western provinces bordering Iran. That much is clear. What’s unclear is whether this is because more women are actually choosing self-immolation as their method of suicide or simply because authorities are keeping more thorough records than they did previously.

It would be wonderful if violence against Afghan women would necessarily end if the war did, but the causes of that violence are rooted in beliefs and traditional practices which are older than the war itself. Changing the attitudes that underpin the abuse of women and girls will happen over decades of education and advocacy — in the span of generations, not projects. And addressing the consequences of violence against Afghan women will require long term political and financial investments by the international community, whether or not a settlement to the conflict is reached anytime soon.

Disclaimer: The views and opinions expressed in this article are those of the author and do not necessarily reflect the official policy or position of Rawan Online.

Rawan Online is the first website on psychology and mental health for Afghans covering a wide range of topics related to health and relationships.
Previous Freud’s Theory of Unconscious Conflict Linked to Anxiety Symptoms
Next Afghan Student Talks about Her Life & Studies in US